They were landing in my hair. Crawling along fence post rails and up lamp posts. Floating across the sun-warmed meadow outside my cabin and glinting like dust motes  in a sunbeam.

I’ve always liked the bugs. Beetles, actually. As a child I learned that if I didn’t squash the bright gold clusters of ladybug eggs on the undersides of my grandmother’s rose leaves, they’d hatch into lumpy, bristled, black and orange alligator larvae prowling for aphids. Soon enough, I’d find their pupae and stow those orange beads in a jar until the adult beetles emerged after a few days.

All these years later I still I accommodate ladybugs—a.k.a. ladybird beetles—whenever they choose to wedge themselves into our window casings and door jambs in advance of  winter’s blast.

So when a ladybug landed on my legal pad as I headed through old growth forest to a writing workshop, I greeted her amiably.

Right there on a yellow page, she retracted her flight wings into origami folds as her elytra—her split, polka-dotted shell— lowered over them like the doors on a Tesla SUV. Genius design.

Unfortunately, I was too preoccupied with towering firs, crimson vine maples and a band of fascinating new writer friends to give more than a passing nod to the tiny creature. By the time I wound my way down the woodland path to dinner, the air had cooled and cleared. The ladybugs had vanished.

Or so I thought.

Just outside the dining hall, an irregularity in two ancient, moss-covered Douglas firs caught my eye. Their deeply ridged bark looked reddish, as if invaded by some unfamiliar lichen.

Yep. Ladybugs. Thousands of them filled the trunks’ furrows as they heaped in upon themselves on a scale far grander than the few dozen that jam into my house’s seams.

My nonchalance about the little beetles had evaporated. I was awestruck.

“Do they keep each other warm?” I asked Heather, a nature writer who lives and breathes all things wilderness. After the balmy day, we were wearing jackets. The ladybugs were huddling.

“The tree does,” she said. “Certain birds, like chickadees, know that, too. They’ll squeeze into the bark on cold nights.”

Such a wonder. Once again I resolved to pay better attention to what the exquisite natural world could teach me about the way things work— and how we fit into that collection of ecosystems. What metaphor could I find in tiny red beetles?

Like ladybugs, you and I are wonderfully, intricately made. We’re also as fragile. We depend upon warmth for sustained flight, and when the atmosphere chills, we survive best in community that finds welcome and shelter in something much larger than ourselves.

For me, that something is the ladybugs’ Designer. 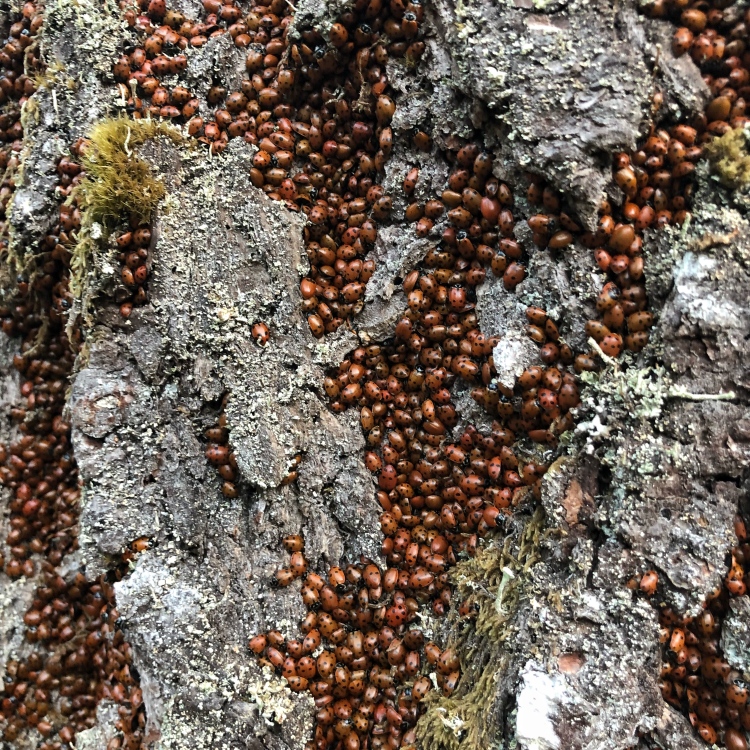 “Whoever dwells in the shelter of the Most High will rest in the shadow of the Almighty.” Psalm 91:1