At 5:30 am on Saturday, we drop the tailgate. Two of our three dogs fly onto the truck’s bed and into their crates, wild with anticipation. Thirteen-year-old Lucy needs a boost, then eagerly finds her kennel beside the others. She scrapes her towels into a heap and flops on her side like Cleopatra on a chaise.

She has no idea how old she is.

Forget the familiar formula. One human year does not equal seven dog years. The ratio is even steeper than that. Roughly speaking, a canine’s first year counts for 15 of ours. The second year, nine. Each subsequent calendar year equals anywhere from five to seven years for a dog.

Good thing sugar-faced Lucy doesn’t do math. Despite the fact that one dog-years chart lands her at the 82-year mark in human terms, she’s still going strong, aging well right there in the back of our pickup.

Two hours later we’re parked along the banks of Washington’s Snoqualmie River watching forty other sporting dogs go through their paces, waiting our turns to run the two younger dogs on a course through the field. From the end of her leash, Mama Lu believes she’s still part of it all.

Shortly after we arrive, she wags at an English pointer and a Brittany spaniel. The pointer’s her friend from years before. The spaniel growled at her once. She spots a son she hasn’t seen for a year, licks his ears, then sits down when he gets a little too sniffy in the wrong place.

She often lifts her nose and reads the air, the tip of her snout bobbling as she catches the scent of birds overhead and in the knee-high grasses. She takes a few bites of her kibble. Samples fresh droppings from the judges’ horses. Licks her chops and chews another, larger bite from the pile.

After every foray into the field she loops back to her water bucket, hidden in the truck’s shade. She laps up a mouthful and lies down to gnaw a rawhide bone before she noses some molehill dirt over it and curls up for a snooze.

By day’s end, I know I want to age like that dog. On the way home, I figure out how.

SEVEN HABITS THAT WILL AGE YOU LIKE A DOG

(But not too much. Be selective.)

(And for them to smell you. But be polite with your sniffer. And sit down if you need to.)

(What could be better?) 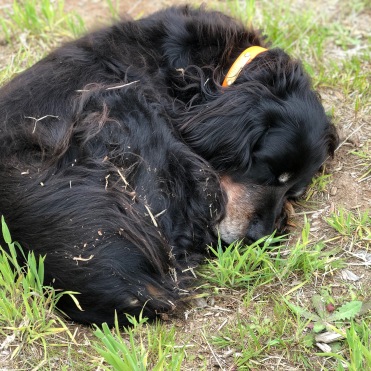 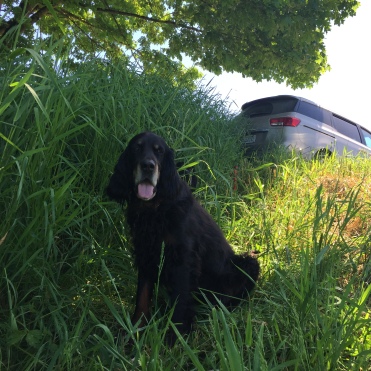